Women’s beach volleyball crushes Conference rival MiraCosta for the second straight week while being ranked #2 in the state. 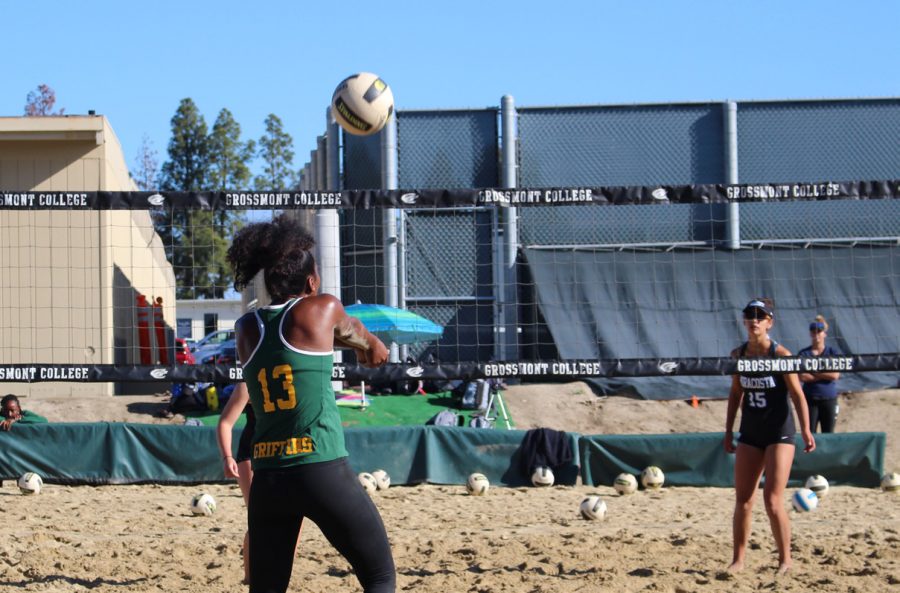 The Women’s Beach Volleyball team is just over the halfway mark of the 2019 regular season, and things couldn’t be going any better for the ladies. While currently riding a 10-game win streak with a 15-2 overall record, the team can be summed up with one word: Dominating. This winning trend continued March 22 when the Griffins crushed the MiraCosta Spartans by a final score of 4-1 on Grossmont’s own sandy courts.

This victory was even more rewarding than the average win as it signified true growth and cohesiveness amongst the team. To fully understand this triumphant progression the team exuded; one must rewind back to exactly one week prior: March 15. The ladies of G-House traveled to the gorgeous Warm Waters Beach in Carlsbad for their first match-up of the season against the Spartans.
The Griffins were able to serve their way to victory, but only by the narrow margin of a 3-2 win. While “a win is a win,” the team still carried the figurative “monkey on their backs” as this initial game still lingered in their minds during the March 22 contest.

Sophomore stand-out pair – Julia Holden and match partner Jamie Sakasegawa – closed out the game, assisting one another with precise sets followed by aggressive attacks, leaving the Spartans digging in the sand for answers. Holden described her emotions after the hard-fought match: “It feels good. We won against them last week, but it wasn’t like as intense as this one. We really beat them this week.” She continued: “It was good to come back from what we learned, and we all like took the week to prepare and we came prepared.”

Spartans are certainly no scrubs themselves, holding an 11-7 record and as of April 5, riding a three-game win streak. The tensions mount even higher when these schools clash as the Griffins and Spartans are rivals in the competitive Pacific Coast Athletic Conference. MiraCosta could not answer the aggressive aces and solid spikes that the ladies of G-House were serving up as this defeat sent the Griffin’s Conference record to a perfect 2-0.

Since this contest, Grossmont has been able to bump its conference record to an astonishingly perfect 6-0 thus far, and hopes are the team will continue in this achieving direction. After the dominating win, Head Coach Jamie Ivers explained: “It was awesome today, it was phenomenal. They are playing at a super high level and it’s been the things that we’ve been working on for the last couple weeks that came to fruition today.

“Definitely looking forward to the rest of the season,” she continued. “I think we’re stronger than we’ve ever been.” Ivers is among many other head coaches who are taking notice of Grossmont’s dominance in the highly competitive sport. The team’s efforts went recognized Feb. 25 when in the 2019 Week 1 AVCA CCCAA Beach Volleyball Coaches Poll, the Griffins were ranked an impressive second in the state, succeeding only to first ranked Long Beach City.

The excitement and positive energy were contagious after the win as the team and coaching staff look forward to the remainder of the season. Assistant Coach Brooke Callahan- Daywault commented: “I think we’re peaking at the right time. I think moving forward we’re going to be in our best position to play the better teams.”

If the first half of the regular season is any indication as to what the second half may hold, then the Grossmont College community will be in store for more than just a stellar record but potentially for a Women’s Beach Volleyball State Championship Title, which the Ivers-led team won, back in the 2016 season.