Remarkable, amazing, wonderful, heart stopping: These are the only words that could possibly describe the highly anticipated film from Marvel Studios, Avengers: Endgame. 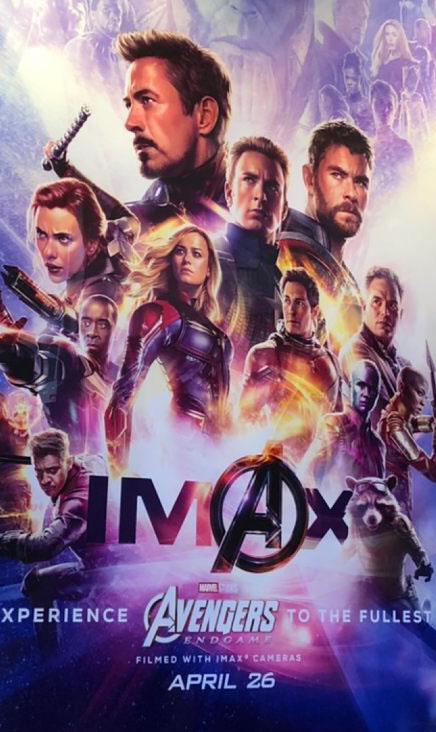 It is sure to keep you on the edge of your seat as the story unfolds on the big screen. The movie is approximately three hours, so go to the bathroom before-hand because you don’t want to miss one second of this epic film.

Let’s talk about this movie. It immediately takes place right after the Thanos’ Infinity War snap, but only after a few minutes, your mind is already spinning. The opening sets up the entire movie, giving us a preview of the struggles and adventures our favorite characters are going to endure.

Prepare for an emotional roller coaster as this sequel is sure to fill your tear ducts, whether it be by laughing or crying. Some scenes are so huge, the only emotions one can exude are shouting and cheering with your mind churning, while other scenes prove to be seemingly small but important enough to silence the entire theater. The on-screen chemistry between the actors is just too much to handle, as there are so many touching moments that happen during this film.

The ultimate goal, as advertised through trailers and previews, is to undo Thanos’ infinity stone snap that wiped out half the planet.

The Avengers try to figure out how to bring back their vanquished allies with exhausting and overwhelming fights that make it all worth it in the end. More than anything, Endgame is complete yet complex, offering a satisfying ending to our beloved original Avengers. It is also, primarily, the sequel to Infinity War.

Similar to previous Marvel films, we get the all-star hero cast for which we’ve grown accustomed to rooting. Chris Evans makes his return to the big screen as Captain America, as well as Chris Hemsworth as Thor, Jeremy Renner as Hawkeye, Mark Ruffalo as Hulk, Scarlett Johansson as Black Widow and Robert Downey Jr. as Iron Man. Our beloved Avengers are ready to kick Thanos’ (Josh Brolin) butt, as they hit the screen in a battle of death. The film also features Marvel favorites: Gwyneth Paltrow as Pepper Pott and Paul Rudd as Ant-Man, as well as Karen Gillan as Nebula. Also joining the fight is Brie Larson, aka Captain Marvel — whose on-screen chemistry with Thor is sure to make even Thanos quiver — along with many other familiar faces, that if mentioned, would spoil the movie.

Whether you’re a fan of Marvel or you’re just now getting into the movies, it’s highly recommended to watch Captain America Civil War and Avengers Infinity War to aid in filling in a lot of the plots. All three of these adrenaline-enhancing movies are directed by Joe and Anthony Russo and written by Christopher Markus and Stephen McFeely. The plot is easy to understand as we follow the characters through complex struggles. Over the course of the movie, we watch as the characters all endure a transformative journey. All of them don’t exactly work out– it’s going to get dark peeps. I warned you.

The ambitious storytelling of Endgame makes it impactful, but it also encounters a few stumbles. A really cool component of this movie is they included the aspect of some distinctive music that can relate and be heard in Guardians of the Galaxy. The music enhances emotions as well as the visual effects. The films’ slated to hit theaters April 26, and I highly encourage you watch it as it definitely is worth seeing.