Campus construction is paving the way for spectacular educational structures, including a massive Arts and Communication Complex, as well as a modernized Science, Math and Career Tech Complex funded through Proposition V.

When you stroll – or, when late for a test, sprint – through the halls of Grossmont, you cannot ignore and, at times, avoid the immense construction occurring on campus. While this remodeling may stand as a slight inconvenience when a student is forced to break their routine route to class, the vast benefits will more than succeed the temporary troublesomeness of the production.

Proposition V, which was approved by East County voters in 2012, is a $398-million bond measure that allows the district to make further upgrades to campus to meet and exceed the academic necessities of students. Currently, there are two major areas of construction that will forever change the face of the college.
Dr. Nabil Abu-Ghazaleh, college president, shared his excitement about the new and improved structures the construction will be producing. He attested to the superior motivation involved in the planning process, which is to benefit student needs.

“One of the important things that we have to keep reminding ourselves, in a high-tech world, is that collocation is still the most important communication technology: being together. In a world where we are expanding online instruction, where we are expanding our accessed information globally; communication technologies allow people to connect at anytime, everywhere.” 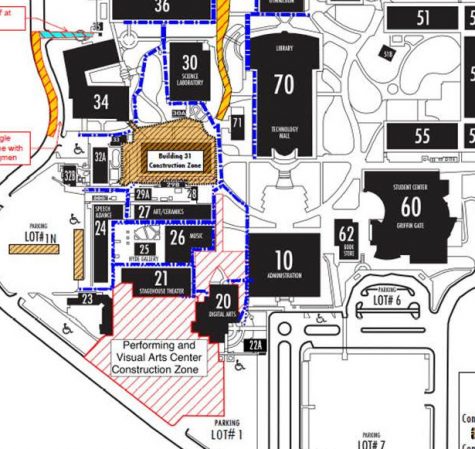 He continued: “The actual physical collocation, chance interactions – what I call ‘being able to smell somebody’ – is important. There are certain elements of this campus—we have amazing labs, incredible facilities, but there are certain elements of the total campus that can be enhanced to create a more engaging space, … a space that says, ‘Sit awhile; connect with somebody.’ And so I’m looking for that in every design. That’s the big picture.”

This first current project is huge, and endeavors to be a major staple of not only Grossmont, but also the East County community: the full construction of a new, state-of-the-art Arts and Communication Complex.
The location of this project on campus is what was previously Parking Lot 1 on the south side of campus between Digital Arts (Building 20) and The Stagehouse Theatre (Building 21). Equipped with gear that would make any tech-junky salivate, the amenities of the new structure are vast and exciting. The estimated cost of this project is approximately $113 million, and projected completion date is set for the Fall 2019 semester. There is already a show booked for the new facility in November.

Abu-Ghazaleh described the project: “The most immediate and exciting event is the completion of our Performing and Visual Arts Center. We call it Performing and Visual Arts center because it is both a theater and will house the art gallery,” he said. “The theater facility will be one of the biggest theaters in San Diego. The actual audience is small and very intimate.”

He continued: “I watched as the facility is being built— there’s no bad seat in the house; there’s also no seat that’s not front row. It’s not true, but it feels that way because even the back row in the audience is only 10 rows back. Between the balcony and the seating in the wings there are many seats that are right up front, on stage.”
The actual theater design is a resonance structure called a “music shell,” which simulates the inside of a guitar. This shell is the size of the entire theater and allows for a diverse sound range that coincides with the integrated structure.
“There will be 3-D elements of it,” the president explained. “It will descend from the ceiling from a fly system, and it’s flexible to allow for venting of sound to control different sides; so that one set of instruments don’t dominate another.”

Another major amenity working in conjunction with the spacious “basketball court-sized” stage will be the exciting addition if an orchestra pit. The addition of this pit will not only benefit the Music Department, but will also integrate the arts together, including the Theatre and Dance departments, unifying the disciplines, Abu-Ghazaleh said.
He described the versatile pit: “It can accommodate 17 instruments. And it’s an elevator lift, so it can either extend the stage or lower it hydraulically and have a 70-piece orchestra on it.”

He elaborated: “That will allow our programs to collaborate like they haven’t been able to before, typically, in the form of musical theater where everybody’s skills are on display altogether, but it will also be a good house for all programs.”

Another theatrical technological apparatus the president said was looking forward to is the addition of a fly system to assist in professional theatrical productions.
He described the system and how it will benefit the various departments: “Our existing Stagehouse (Theatre) is a wonderful learning theater; it’s an intimate house but it doesn’t give us the capacity to have scenery and anything you would normally put in the fly system ready to drop,” he said. “It’s both massive and flexible, so we will see some theater magic.”

Even the curtains will be structurally designed to deaden the house-sound for speech events; when pulled or when retracted, the house becomes a part of the entire theater.
The next major item on the remodel list is the construction of the Math, Science and Career Complex, which will also include a spacious Veteran’s Resource Center. According to Abu-Ghazaleh, Building 36 is slated to begin full construction within 12 months.

Much of this construction is focused on not only the integrating of departments but the integration of students and instructor as well. He said he is most excited about he new complex’s math studies center.

“Although the classrooms will be amazing, but we are in fact designing a study center centered within,” he explained. “Sort of surrounded by faculty spaces so the core of the building will be the math study center, and the faculty offices will surround it on three sides.”

Communication integration is an aspect the faculty is hoping to achieve with this optimal technology.
“Earth Science is looking to have electronic bulletin boards that are live all the time,” Abu-Ghazaleh said. “To have it actually connected to live feed to keep geology and geography connected with what’s really happening in the world – whether it’s weather events, natural disasters, political events– to be able to bring that into the daily lives of students.”

While this new complex will consist of many amazing amenities related to mathematics and earth sciences, it will also house a structure of which Abu-Ghazaleh is especially proud: a Veteran’s Resource Center. Although Grossmont currently has a resource center on campus, it pales in comparison to the future complex.

“The existing Veteran’s Resource Center was centered around a much more smaller college, and Grossmont is not a small college anymore,” the president explained. “We have about 1,200 students that are documented veterans; this is in addition to the many veterans that are not actually using any benefits who are continuing to come here.”
He described the future center:“It will be a separate element of the building, but we’re at least doubling the size to a 4,100-square-foot facility that’s centered around service. There are offices for counselors and guidance opportunities; there is a social space. There is a considerable element that is split between open computer lab and study rooms.”

Many students may see this construction as somewhat bittersweet, as by the time some of these facilities are completed, they would have already ventured to their next phase of their lives. While some will not be able to reap the benefits of these long-term endeavors, they can at least be proud that the institution from which they are receiving their education is upgrading. As Abu-Ghazaleh emphasized, this remodel is not only beneficial to students but the community as well.

“It’s hugely important that we are both grateful to our community for funding our bond construction and that we are good stewards of that resource, and create facilities that truly serve, ultimately, the students and the broader community,” he said. “It does make a difference; it makes a big difference.”