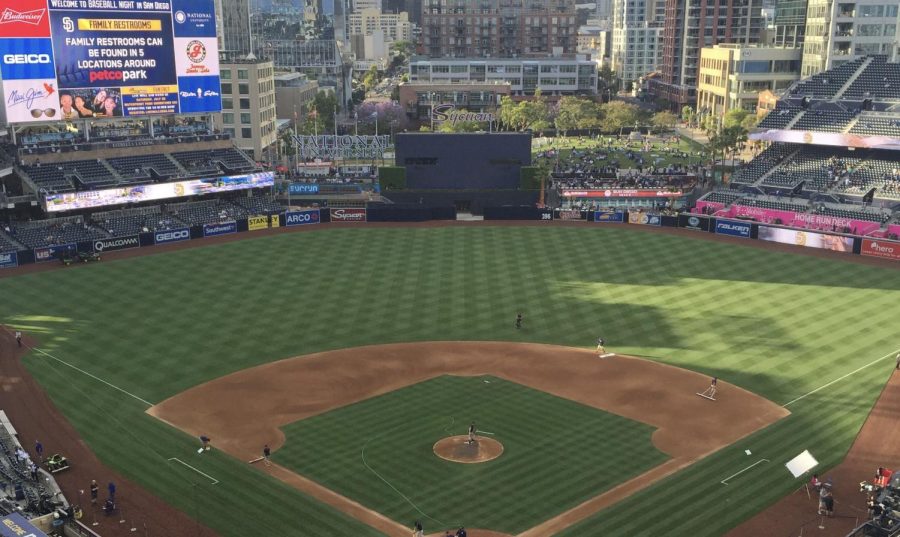 Major League baseball is back for the 2019 season, and for the San Diego Padres, this season already has
a different feel to it. The season opened up March 28, as the Friars took on their longtime rival San Francisco
Giants in a four-game series. The opening day ceremony kicked off with fans getting excited for new Padres players: Manny Machado, as well as top prospects Fernando Tatis Jr. and Chris Paddack. The Friar faithfuls were excited to see returning fan favorite players such as Wil Myers, Eric Hosmer and Austin Hedges.

Padres manager, Andy Green, gave the ball to 23-year-old pitcher Eric Lauer, who made his first opening day start.
Lauer’s impressive spring training is part of the reason he got the nod to start, having pitched 10 innings and not
giving-up a single run. For the Giants, manager Bruce Bochy gave the ball to veteran starting pitcher Madison Bumgarner, who made his fifth start. The Padres’ left-fielder Myers was the only offense the entire game when he took Bumgarner deep in the third inning with a solo home run to left center field. He later drove in new second baseman, Ian Kinsler, with a single up the middle to make it 2-0 Padres.

The Padres won their first opening day game since 2014, with Eric Lauer getting the win and Kirby Yates getting the save. Myers and Machado weren’t the only Padres to make headline news on Thursday. General manager A.J. Preller
announced that the team would be bringing up shortstop Tatis and pitcher Paddack. Tatis, 20, had not
played at the AA level in the minor leagues, and many thought the team would keep him in the minors for two weeks to add another year of service time. Tatis was ready for opening day, having been the youngest player to start since
Adrian Beltre in 1999. He got his first two Major League hits off Bumgarner, the youngest player to accomplish that since 19-year-old Hall of Famer Robin Yount in 1975.

Game two of the series was another victory for the Padres, as winning pitcher Joey Lucchesi went just over five innings. The Giants made it interesting at the end, getting the bases loaded in the ninth inning. Kirby Yates came to secure the 4-1 win, and Machado collected his first two hits as a Padre.

The Padres dropped Saturday’s game-three of the series by a score of 3-2, but were able to bounce back on Sunday with a 3-1 victory to take the series over the Giants. This was the first time the Padres won an opening series since 2011.