What’s in a Name?

Speech and Debate is much more than its definition. 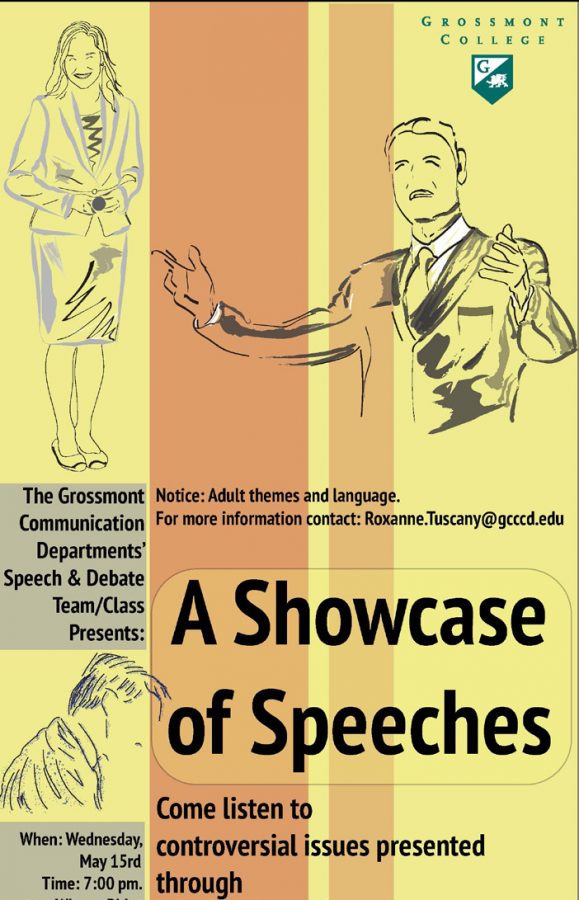 Imagine a team where everyone was able to speak about their passions free of judgment and all ideas were welcome. It may seem too good to be true, especially in our society’s current social climate, but Grossmont College has a group of talented and insightful students who are pursuing their passions and creating a camaraderie within their Speech and Debate team (also called the Forensics team) while speaking about personal, political and social issues.

Although it is part of the communication curriculum, the speech and debate class is not like the average class at Grossmont. Meeting every Wednesday from 5:15 to 7 p.m., they begin class with vocal warm-ups and tongue twisters. They push the desks to each side of the room and stand in a circle and immerse themselves into their warm-ups. The volume goes from low to high as they say phrases such as, “The big black bug bit the big black bear,” in unison, with concentration.

“Should we do step-ins?” someone in the circle asked. Then, taking turns, each person stepped in the circle one by one and said a phrase, often with gestures. Once they stepped out, the group stepped in, repeated the phrase and mimicked the gestures. Throughout the activity, they would pause and discuss their enunciation of the phrases with advisor Roxanne Tuscany.

After warm-ups, for this particular class, they viewed a slide-show of photos from their successful state speech and debate competition in March. Four team members attended the competition, winning bronze, silver and gold awards. Team member Andrew Jassick, won gold in speech to entertain, one of his three events.
At the beginning of their classes they instantly establish teamwork and an high energy environment where everyone is included. The best part is everyone on the team is there for a different reason, with a different passion and it is one of the most supportive and interactive environments.

“I have very personal reasons for joining the speech and debate team,” Jassick said. “I would very much like to become a public and motivational speaker, once I get through with school. So to me, speech and debate is primarily a platform for me to be in an environment where I can share that passion with people around me and hopefully get noticed by somebody important that would give me the opportunity to do that on a full-time basis.”
Jassick added: “It literally embodies the drive I have to do better every day; it’s the entire reason I’m in school.”
A communication major in his final semester at Grossmont, Jassick is just one insightful member of the speech and debate team, and his reason for being there differs from that of his teammates.
Francesca Labrana is a communication major in her first year at Grossmont. “Personally, I took this first as one of the requirements that I have to take,” she said.

She added: “I’m more on the introverted side I’d say. I don’t like speaking out unless someone comes to talk to me first, and this didn’t give me any choice then to step out of my comfort zone, and I think it gave me a lot of opportunities. I feel like I’m more comfortable doing things that I never would have thought of doing before.”
Of course, you don’t have to be a communication major to join the Speech and Debate team. Jose Rolando Perez is a first-year Grossmont student majoring in nursing, and teamwork played a big factor in his wanting to join.

“I think being part of a team is important. So in high school, I was a part of football, track and all that stuff, and I like the morale of someone depending on you and the pressure, a little bit—I enjoy that,” Perez said.
With many different personalities and passions, it seems like it is difficult for everyone to participate to their full potential. However, Speech and Debate offers multiple categories to participate and focus on.

“Everybody does different events,” Jassick explained. “So some people do the debate portion of it and then outside of debate, you have what’s called individual events. There’s events like interpretation— so for example, poetry or drama or prose. …. Then you have platform speaking, which is like a speech to entertain or an after-dinner speech or persuasive speech. You have limited prep speeches, which are impromptu speeches.”
Having such a variety of events with everyone doing something different means just one class is not going to prepare them for their tournaments. In addition to a weekly class, Jassick said they meet every weekend to practice often.

In addition, students need to meet weekly with Tuscany, the adviser.“So you would sign up for a specific time
outside of class then you’ll meet in the office and go over whatever you want to go over,” Jassick said. “For a regular
person on the Forensics team, I’d say in meeting, bare minimum at least three times a week.”

All that practice preps them for their tournaments, which are on a whole other level. “It’s a long day,” Jassick said.
“Typical tournaments last at least a good 12 hours. They start early in the morning roughly around 8, and they will
go on. I’ve been in tournaments until like 9:45, 10 at night. “It’s arduous, it’s tiring, and the entire time you’re doing it you have to keep your composure as if the actual real world around you isn’t happening,” Jassick admitted. “It’s literally getting into that mindset of learning whatever presentation that you’re doing. You have to bring that to life, and you can’t let influences from the outside really get in the way of that.”

Though their tournaments aren’t done in a breeze, they allow the team to compete, win and improve their skills as
well as some other bonuses.

“I wasn’t sure what to expect at first but it gave me an excuse to get a suit that would be good for future job
interviews. I was really happy about that,” Perez said, when describing his first tournament on the team. Labrana also had her first impressions of tournaments. “I thought the first ones that I would go to were interesting because I’m like novice, so it’s the beginner level, and I would go observe people in the open— so the people who
have been doing this for years in their eighth semester of college. It shocked me at first. The first time I watched
them, I didn’t know you could be given those emotions,” she said. “The first time I watched one was a poetry one of
a mother and daughter crossing the border train to come to America and she loses her daughter, and I literally
started crying in the middle of a room.”

Naturally, not every team is going to be immediately perfect. It takes a great coach and great players to achieve
success, and Grossmont’s Speech and Debate team can rely on Tuscany to motivate and help them reach their full
potential. “I would say, isn’t a typical teacher where she has a curriculum and she lectures from a curriculum,”

Jassick said of Tuscany. “She literally lets the students encompass the idea of the class, and I’m not just talking
about forensics. This is just the way she is.” He continued: “I don’t think there’s anybody that comes … out of Forensics and doesn’t consider her not only a friend, but an incredible inspiration in what they do every day.”
Perez agreed. “She always tries to make herself available,” he said. “She has the sign-up sheet right out there, and if
you can’t make it at one of those slots then you can call her. I feel like she’s there almost anytime you need to reach her.”

Availability is important, but so is helping the team in their performances, which Tuscany does, according to Labrana: “You’ll see some of her critiques of what you’re doing and it’s just like, ‘Whoa, I never knew somebody
could tell me that,’ but it’s good because it’s every little thing you’re doing wrong and it just helps you improve beyond what you could do by yourself with anybody else.”

With tedious but beneficial tournaments, a dedicated coach and a team of individuals eager to share their passions, Grossmont’s Speech and Debate team is more than a group of competitors— they are students and friends
with stories to share.

“It’s amazing the kind of relationships and bonds that you form with these people because they’re all happy about the same thing as you,” Jassick said. “And you can get that on the football team on the baseball team, whatever, but I’ll tell you, at different tournaments you’ll hear people talking about racism and sexual molestation and being persecuted for being fat and police brutality. You’ll hear people talking about this free, and you’ll hear it often in
tournaments because the outside world is not a comfortable place for you to talk about things like that.”

The realm of Speech and Debate is one in which all types of people who have their own passions can come together, because that is one thing they all agree on— it’s a place for them to express
themselves.

“It’s an incredibly welcoming environment,” Jassick said. “These are a bunch of kids, you know what I mean, that some for the most part I would say don’t have necessarily the life experiences that I have, but man, there are some stories here that deserve to be heard, and this place gives
them a platform to do that.”

Communication major or not, students find the Speech and Debate team at Grossmont to be a place for expression through various forms about various topics, in an environment where individuality and opinions are
supported and awarded.