Grab your tissues, cause Toy Story 4 is a tear- jerker. 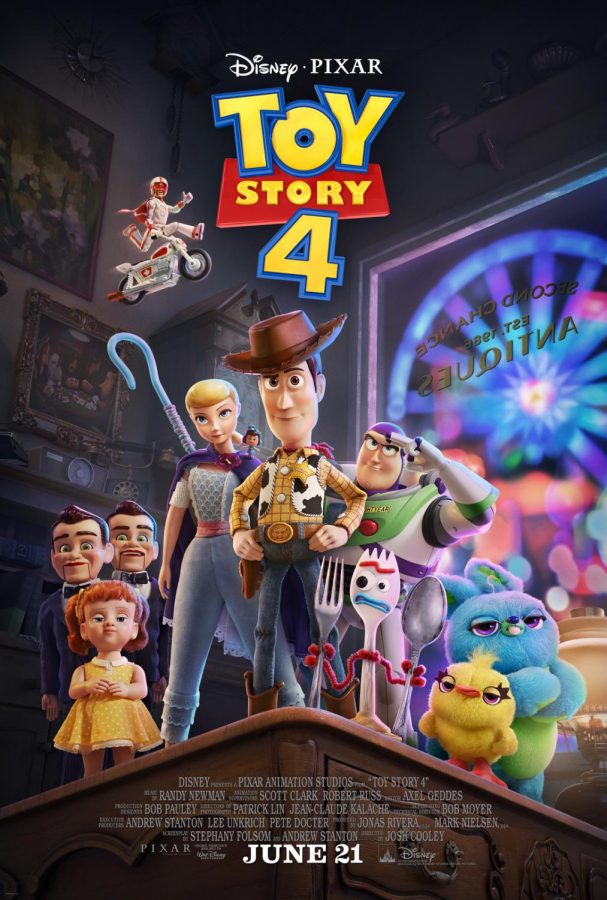 Woody, Buzz and the gang are back again for round four, with a new adventure and new friends. This fourth installment of the Pixar classic will mess with your emotions. The film is approximately 1 hour and 40 minutes in length.

The movie takes place right after Andy has set-off to college and the toys are happily living with Bonnie– the young girl whom he gave his beloved toys to during the end of Toy Story 3.

In the beginning, the movie clears up a few loose ends stemming from the prior three films made over the 24 year period since the original was released in 1995; such as explaining where the character “Bo Peep” has been all this time and why she didn’t make an appearance in the third film.

Bonnie is starting kindergarten where, with the help of Woody, she creates the new lovable character, “Forky” the spork. Laughter is expected as we watch this Spork go through an existential crisis, not accepting himself as a toy but instead trash. Forky is always trying to throw himself away, which tires out Woody but enforces how important Forky is to Bonnie.

With a surprise road trip, the gang hits the pavement as new and old friends come into the picture in a happy, touching adventure.

The sequel reunites the returning voices of Bonnie Hunt as Dolly and John Ratzenberger as Hamm, along with the rest of the beloved original characters.

It brings back Bo Peep played by Annie Potts as well as introduces new characters, such as Duckie (Keegan-Michael Key) and Bunny (Jordan Peele); a dynamic sewn together plush ventriloquist toy duo.

Also, introducing Duke Caboom, a daredevil from Canada voiced by megastar Keanue Reeves. The audience also meets Bo Peep’s partner, Giggle McDimples played by Ally Maki and not to leave out, Christina Hendricks as Gabby Gabby– a doll in need of love and care from a child.

Disney- Pixar is known for its “Easter eggs” (subtle hints) towards other movies, such as the recurring Toy Story pizza planet truck in almost every film. It makes no difference if you are watching carefully, or casually observing– subtle hints pop out. Little nods are featured towards Pixar’s top films and also a few to Pixar shorts.

This heartfelt touching story is sure to pull you in with lots of love being expressed throughout the film. The central theme is change, something that can be related to everyone as the characters grow. Woody questions his place when he finds Bo Peep, not sure if he should return back to Bonnie.

Bo Peep is very different from the first two movies making her a strong female lead that is very inspiring. Gabby Gabby, the doll from the antique shop, perceives life one way but ends up with a huge shock.

The movie is incredible and a great ending to the Toy Story saga. The heartfelt moments will make you cry with laughter or happiness. The movie is very energetic and full of sweet moments that one can never forget. Love between the characters is strong and will certainly pull on your heart strings.

The movie is set to hit theaters June 21st and comes highly recommended to see. It’s worth expressing emotions with a crowd of people.