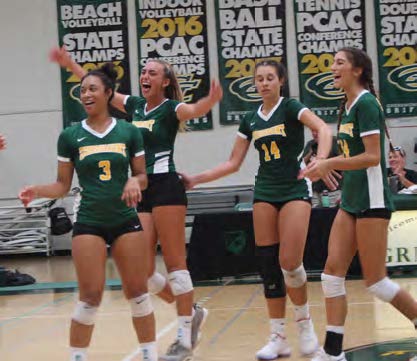 Following a CCCAA Women’s Beach Volleyball Championship title won in May, Grossmont’s indoor team is now heading in the same direction as their outdoor predecessors, minus the sticky beach sand. The ladies opened the G-house gymnasium Aug. 30, hosting the Grossmont Classic in true dominating fashion, dishing back-to-back 3-0 game wins against the Cerro Coso Coyotes, followed by the Riverside Tigers.

“It’s very exciting: it’s our home, it’s our gym, our house,” sophomore outside hitter Naomi Talisa Leilua said, after the win against Cerro Coso. “And we came in excited and really just happy to be here, in our home— where we’re comfortable.”

The athletes looked more than comfortable on their home court as returning all-star beach volleyball phenom Shaney Lipscomb dominated on both sides of the net, spiking it to Cerro Coso often while jumping and blocking to defend the G-House court.

Along with Lipscomb, returning players from the spring Women’s Beach Volleyball Championship team include the amazing athleticism of setter Haley Morton and outside hitter Chloe Emery who, like Lipscomb, stands at 6 foot 2.

These sophomore pros were back at it for the home-opener. Grossmont’s first set began with the accurate serving of Morton supplied with Lipscomb dishing aggressive, “in-your-face” kill spikes. Cerro Coso was able to respond, receiving a point via an attack-error supplied by the hard-hitting Lipscomb. The one-point giveaway was desperately needed by the Coyotes, as Grossmont would crush them 8-3 in the following matches of the first set. 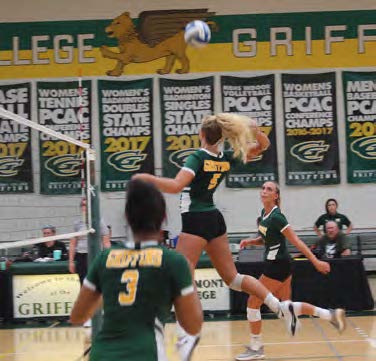 Error points seemed to be the only offense Cerro Coso could create, as their fourth point would come from a Carly Gonzalez service error. This error seemed to summon the Coyotes as they went on a five-point scoring run, until Grossmont smartly called a time-out with the score of the first set at 14-13 as G-House narrowly led by just one-point.

Assistant Head Coach Brooke Callahan was acting head coach in place of Jamie Ivers during the tournament. After the game, Callahan commented on the Coyotes’ efforts: “Cerro Coso did a lot of good things. They’re a super-scrappy team; they digged well.”

The scrappy game play supplied by the Coyotes was not enough to take down G-House as the Griffins soared after the time-out, winning the first set 25-18.

This momentum would carry over, with Grossmont serving first in the second set, as the team went on a four-point scoring run. It was yet another service-error committed by the Griffins that would give the Coyotes their first point of the set as Grossmont led 4-1. G-house went on to annihilate the second set, going on two three-point scoring runs followed by back-to-back four-point runs. Behind the powerful and accurate serving of freshmen middle-hitter Brooklyn Anderson, the Griffins finished the set by an impressive score of 25-11.

“The first home-game, super-exciting; I think our girls did awesome,” Callahan said.

While it was the first fall game played on the G-house gymnasium court, the women played with a sense of cohesiveness and resilience true veterans demonstrate.

The Coyotes would not be laid to rest easily though, as they dug deep and kept the third set of the game neck-and-neck. Grossmont started the third set with Morton serving hard, but the Coyotes howled back, scoring the first point of the set. G-House roared through, scoring four straight pointsafter the initial Cerro Coso score.

The Griffins’ comfortable lead though began to be jeopardized, as the Coyotes played stealth defense, forcing G-House to work hard for every precious point. The third set proved to be a contest of perseverance as the teams battled back-and forth, when the Coyotes tied the set 9-9, off an attack-error.

Cerro Coso received a glimpse of daylight as, for the first time in the game, they took the lead over Grossmont 11-10. The Griffin’s’ offense took offense to this lead change, and came out hot. G-House went on a five-point scoring run behind the scary serving skills of freshman setter Sydney Frigerio.

It was all G-House from there as the team went on a three-point scoring run, sealing the victory. The Griffins went on to win the third and final set of the game, 25-18, as Grossmont swept the Coyotes under the rug, beating team in three straight sets.

“We’ve still got a lot of work to do, but for our first game I think it was a really good first match,” Callahan said after the game. “It’s just a matter of us picking up our system and making sure we go into our next game and kind of have
our systematics.”