The Griffin Grill is gradually becoming a less-popular option among Grossmont students. Here’s why. 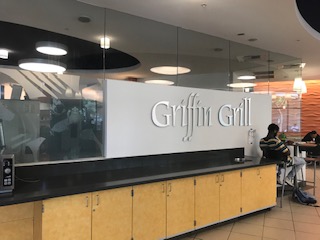 In many ways, Grossmont College’s campus works like its own miniature city. While not as large as SDSU or USD, Grossmont makes up for this by running like a well-oiled machine. Like most cities, Grossmont has its residents and leaders, peacekeepers and legislators— the students, professors, sheriff ’s deputies and deans. The students make up most of the population, and the staff, like workers in a city, all have their own area of expertise.

Grossmont also contains an array of buildings, which all work together to play their part in keeping the city running. Each building on campus plays a part in offering something valuable to students, which makes the Griffin Grill’s existence at its current state something of a paradox.

As far as community college food options go, Griffin Grill has one job, and it’s pretty simple. Being the only eatery on campus, the grill should be able to provide basic sustenance to students at a reasonable price, while following the most rudimentary of health codes. This is due to the simple fact that Grossmont Community College is exactly that: A community college.

Though we as students don’t require fine dining, we prefer that the food made available to us here on campus, be cooked and appetizing. Also, Grossmont has a discounted tuition cost from a conventional university— wouldn’t it make sense for the food to be discounted as well?

Grossmont College’s Griffin Grill essentially falls short of greatness in these categories. Firstly, the conditions of the food are rather grim. The pre-made food, such as the chicken tenders, pizza, french fries and the pasta-bowls are made pretty much after someone takes a food item, which is every so often. This being the case, specially requesting the food be made fresh would undoubtedly be the better way to go.

However, the food normally simply sits under heat lamps for seemingly hours on end until someone decides to snag one of the items. That breakfast burrito you just scarfed down? It has probably been sitting under a heat lamp for quite a bit, but when one hasn’t eaten all day and has a measly 10 minutes between classes, these unsavory food conditions become less and less concerning to a famished student.

Sure, Griffin Grill might utilize quality ingredients, but the end result sits out so long, it might as well be a side dish left out to spoil in the sun at a birthday party.

Several students who frequent Griffin Gate, the building that houses the grill, shared their concerns.

“The texture of the food looks kind of stale, and it collects this smell the longer it sits under the heat lamp,” said Thomas Shordon, Grossmont student and patron of the grill. “I like to hang around Griffin Gate in the time between classes, but the smell just makes me feel sick as soon as I stroll in.”

If the unremarkable quality of the final product was justified with an unremarkable price tag, that would be one thing. An average meal at Griffin Grill will set a hardworking student back about $6, and that’s for the previously mentioned lamp-heated meals.

A freshly made sandwich, an arguably better product according to some students, will cost upward of $7. Sure, that may also be the average price of hot food across SDSU, but there are significant differences.

SDSU’s cafeteria houses reputable fast food names such as Subway, Panda Express, Rubio’s and Starbucks, which many people see as a step up in terms of taste and reputation. Community college is the most reasonable option for fixed income students, but being faced with expensive food every day is bound to cause unnecessary stress and alienation for less-fortunate students. However, it is worth mentioning the staff at Griffin Grill will give a 10% discount to campus personnel as long as a staff ID is shown.

It’s well-known college students lack time for much besides work and school. With this in mind, it’s incredibly destructive to a student’s health and well-being for the only food option in close proximity to be charging twice what they should be for a meal.

“I’ve been coming to Grossmont for over four years,” Student Savannah O’Toole said. “The food has risen in price so much over the time I’ve been attending that I can’t afford to eat it anymore. Grossmont needs to cater to low-income students and accommodate them. The whole point of having a grill on campus should be to make food accessible.”

The average student most likely doesn’t have a free 20 minutes between classes to drive over to Taco Bell or Jack-In-
The-Box for more affordable options— and the average student doesn’t want to give up their hard-earned parking
space on campus. Students are still frequenting the Griffin Grill, due to one thing: supply and demand. Griffin Grill
is the only place on all of the Grossmont College campus to get a hot meal. With this in mind, why are the prices set at these lofty numbers?

“The way the structure works is that Sodexo is the food service provider for Griffin Grill, and they’re an independent contractor,” said Bill McGreevy, interim vice president of Administrative Services at Grossmont.

“The GCCCD signs a contract with (Sodexo) to provide food services for both colleges . My understanding is that Sodexo sets their prices based on what they see regionally, based on the producer price index. The college does not set their prices; Sodexo does.”

To look further into the pricing, and how Sodexo works, Suzanne Place, the Sodexo general manager, offered some helpful clarification: “We are actually the lowest-priced in the area, and try to keep it as low as possible,” Place said. “Unfortunately, our food costs have gone up triple. Even still, we have held onto the prices that we can, so that we don’t put that on to (the students) and make our prices higher than they are now.

“We do not intend to overcharge anyone. Our purpose is to be here for the students,” Place continued. “Our prices are very in line with the food costs and with what’s going on in the world.”

Knowing now the company operating Griffin Grill is doing what they can to keep their prices reasonable, perhaps a value menu of some kind or a student meal card would be a helpful step in the right direction to ensure every customer can be taken care of.

If not, Griffin Grill may find their only remaining customers to be the more fortunate students at Grossmont— the
students who have the luxury to know where their next hot meal will come from.