The Griffins tip off the playoffs with a 3-0 victory at G-House. 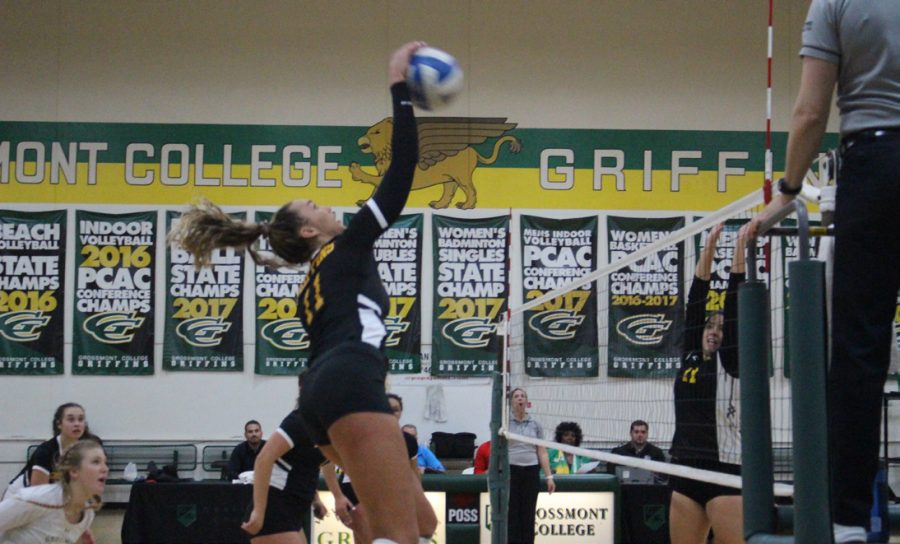 Shaney Lipscomb spikes the ball for the Griffins.

The women’s volleyball team at Grossmont College had a dominant regular season. Although they didn’t go undefeated, they are regarded as one of the top teams in the state and have the statistics to back it up.
The Griffins won 24 of their 27 matches, 16 of which the other team failed to win a single set. They outmatched their opponents week in and week out, winning 75 of their 93 total sets. That’s a win percentage of just over 80% on sets alone.
Simply put, our women’s volleyball team is once again among one of the best Volleyball teams in the Pacific Coast Athletic Conference (PCAC), and they showed everyone why at G-House Nov. 26.
The fourth-ranked Griffins started their playoff run by taking on the Golden West Rustlers, who went 15-8 on their season.

With both teams sporting black and gold uniforms, the first set started off as a back-and-forth match, with neither team able to maintain any momentum or gain a decent lead. Golden West went on a small roll and found themselves up 14-9 on the Griffins— until Grossmont put up 10 unanswered points, snagging a 19-14 lead. Golden West tried to crawl back, but momentum was on the Griffin’s side, as Grossmont took the first set 25-16.
The momentum the Griffins found in their first set carried over in the second, as the dominance of Shaney Lipscomb, Carly Gonzalez and Haley Morton gave Grossmont a quick eight points before Golden West finally picked up their first point. The Rustlers tried to catch up, but failed to keep the score gap lower than six points. Once the score went up 11-5, the Griffins became unleashed again, as Naomi Talisa Leilua, Brooklyn Anderson and Gonzalez scored 10 of the next 12 points, making the score 19-8. That was as close as the Rustlers would get at that point, as the Griffins took their opponents to the cleaners with a 25-13 final at the end of the second set.

With two sets won, the Griffins just had to win one more to move onto the next round of the playoffs. This set also began as a back-and-forth contest, with each team scoring two points a piece. Natalie Seol and Lipscomb worked to widen the gap, but Golden West wasn’t ready to quit. Grossmont continued to hold a slight lead for the majority of the set, with their highest lead being five points, as they lead the Rustlers 17-12. However, that lead was short-lived, as Golden West found itself in the lead thanks to some Griffin mistakes.
Despite Golden West giving Grossmont a run for its money, the home team was victorious on the set, allowing the Griffins to shut out the Rustlers 3-0.
The win allowed the Griffins to move on to the next round of the Southern Section Regional Playoffs. The Griffins sounded eager to add to their dominant legacy.
“It was definitely good to start out strong,” Lipscomb said. “We did a lot of good things that we were working on and saw a lot of things that we need to work on, and we were able to do that without losing.”
Not only were the Griffins able to get a dominant win, but they were able to get it on their home court: their beloved G-House. The quality win came just in time to start off the Thanksgiving holiday on a high note, not just in front of other students and friends, but in front of distant loved ones as well.
“My whole family was here,’’ Lipscomb said. “It was really cool to play in front of them.”
Lipscomb wasn’t the only one with family in attendance. Several other players were ecstatic to put up a dominant win in front of friends and relatives.
“My brother just came from Arizona for the Thanksgiving weekend,” Seol said. “The timing just played out perfectly, and it really helped a lot.”

The family support just added wood to the fire the Griffins ignited during the regular season, as players continued to light up the score sheet. Lipscomb ended up leading the Griffins in points, with 22.5 on the night, followed by Gonzalez with 12, Anderson with 9.5, and Talisa Leilua and Seol with nine points of their own. This even production and versatility of players throughout the entire team is something the Griffins want their opponents to know and fear moving forward.
“Take it as a warning,” Seol said as a message to opposing teams. “We’re pretty tough. Even if we start out rough, we know how to fix mistakes and accomplish anything we set our minds to.”
The Griffins moved on to play the Bakersfield Renegades that following Saturday at the G-House. After losing the first set, Grossmont would end up handling the Renegades, winning the next three sets, cementing their spot in the CCCAA State Tournament at Southwestern College Dec. 6, as the Griffins continue to build an elite legacy across Southern California.