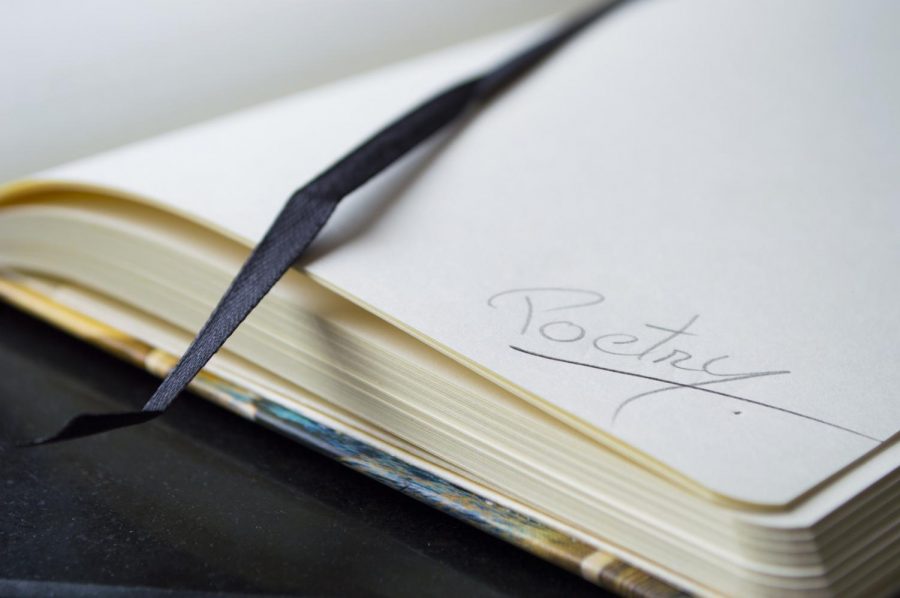 On April 26, Grossmont College’s literary arts department hosted a Poetry Slam featuring readings from a total of nine contestants. Each contestant recited a poem and was judged on a scale of one to 10 by five judges. After each poet performed, the winners for the next round were chosen. Those who went on to the next round got an opportunity to recite another poem. At the end, three winners were chosen, with first and second place winners receiving an e-gift card.

The slam started when host Gill Sotu was introduced by Grossmont English instructor Daniela Sow. Sotu, who has a long history of poetry writing, playwriting and DJing according to his introduction, was the emcee of the event.

Shortly after his introduction, Sotu came onto the screen. “Thank you all for being here today, it is my pleasure to meet and be with you all virtually. This is crazy times but the art and the music, and the poetry, it has to remain. It’s the things that keep us sane, keep us going,” Sotu said.

After this, he proceeded to interact with the audience in search of five judges, all of whom had to have no relation to the contestants whatsoever.

Sotu made his pick of who would judge for the day and went into a breakout room with the judges and poets. The audience was left in the Zoom, with lo-fi music murmuring in the background as members conversed in the chatroom.

Once the intermission was over, Sotu explained to the audience that he wanted them to be as active as they could in the chat. “I want you to sway the judges. If someone poured out their heart and all their energy and they gave them a 2.5, then it’s okay in this family setting, to boo the judges,” he said.

Sow, who organized the event, wanted to make sure that the English Department was able to hold the event this year despite not being able to have it in person. “We were supposed to have it in the last spring 2020 but the whole festival got canceled due to the pandemic, of course,” she said.

“I know some people had virtual events but it was just we didn’t know what was gonna happen,” Sow said. “We just canceled it, so to bring it back and do it virtually was exciting.”

Sow began by reciting a poem, and the nine contestants followed her. There were various topics covered by each poet. Some talked about motherhood, while others talked about anxiety and mental health. There were also poems on topics surrounding sexual orientation and self-expression.

Bennett, the first-place winner, was born and raised in San Diego and is an English major. Although she was nervous to compete in the poetry slam, ultimately she said she decided to join after Sow, her English professor, convinced her to compete.

Sow has had Bennett as a student since 2020. “I reached out to Artrice because she has pieces that stay in my mind,” Sow said.

Sow also said Bennett has a great work ethic: “It’s strategy with poetry slams. You’re not going to share any poem that you think might do, you’re gonna go in very intentionally with ‘which poem are you gonna perform in the first round?’” she said. “It has to be strong enough, and get a strong enough score from the judges to get you to the second round, so we work together on that, but I knew I was working with somebody who is very promising and needs to get published beyond Grossmont College.”

Bennett recited two poems. The first was titled “154 Days,” which centered around heartbreak. According to her, the poem was a learning lesson for her after she was “cutting it off” with a guy from her past.

The second poem, titled “Forever Your Witness” was about police brutality. “Second poem was about the murders of black people from police officers,” Bennett said. “I mean last year is when it kind of really blew up again, but I had that first line ‘I saw them fall’ like a couple years ago, I think, and then It just kind of grew and expanded from there.”

Although she did not predict she would win, Bennett said it was a nice surprise: “I was not expecting to win at all. I was just happy to be able to participate in this, so I was really happy I felt really seen.”

Harris, the second-place winner, had a dissimilar view of his title, saying every poet there deserved his spot. “I don’t know how much poetry can be judged,” Harris said. “I don’t know that I deserve second place necessarily.”

While clarifying Bennett deserved first place, Harris stated, “I don’t think that I was the second-best poet there by any means. I don’t know if there is a second or third best poet there. It felt a little weird, but it was nice.”

Harris, who is also in Sow’s creative writing class, said he got into poetry after reading poetry books for his classes and listening to it through podcasts. He decided to join the poetry slam after he wrote one of the poems he performed at the slam.

Performing was a good experience for Harris who had never competed in a poetry slam prior to this event. He explained the best part was hearing everyone else’s poems. “There was not a single bad poet at that event. Everyone was brilliant, I was just blown away,” he said.

As for the future of poetry slams at Grossmont, Sow said she hopes to continue to hold the event because of the many stories that still need to be told. “There are always stories that need to be heard,” Sow said.

“Each time a poet gives us their time on stage, I understand they’re giving a little piece of themselves to us, and it’s worth thinking about no matter how many times the arguments been revisited, they have their own way of experiencing and saying something.”