At the groundbreaking ceremony for Building 36, Grossmont's administration comments on the project’s accomplishment. 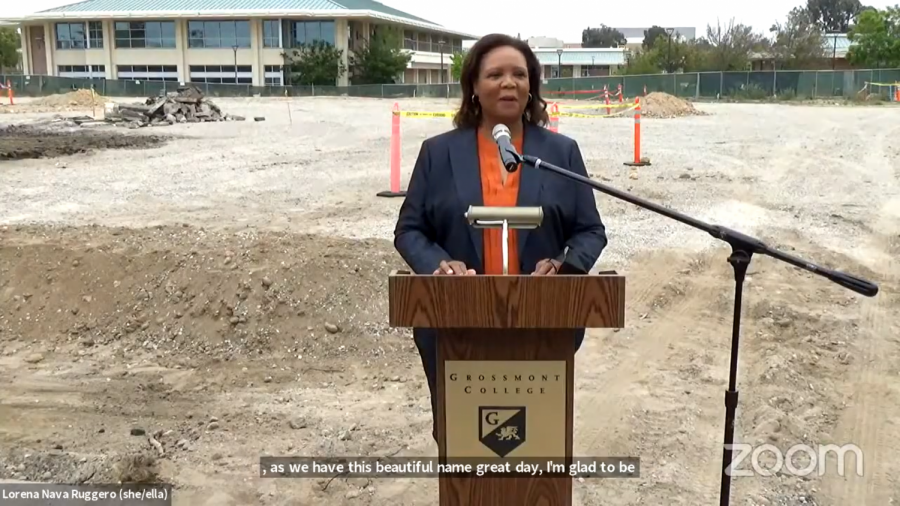 Grossmont’s Interim President Marsha Gable stood behind a podium acknowledging the Kumeyaay people and their land on which Grossmont sits. That land is also the site of the groundbreaking ceremony for building 36.

Grossmont administration live-streamed the ceremony May 13 as it celebrated “a new milestone in the history of the college.” Speakers went up to the podium to talk of the difficulty getting to this phase of construction and their excitement as construction begins. They expressed how they see the future building as a way to both bring new students and keep existing students coming to campus to get an education.

Dr. Lynn Neault, chancellor of the Grossmont Community College District, took the podium to present how the district has been serving the community for more than 60 years and has transformed “hundreds of thousands of lives” from its two colleges.

“The past year has been arguably the most difficult,” she said as the district was forced to engage students remotely during the pandemic. She said she looks forward to when students can come back to campus and to Building 36, continuing the legacy of the campus. “It’s the critical importance of our campuses for our students, places to learn, gather, engage with each other, to create, to share stories and to thrive,” Neault said.

Brad Monroe, president of the Governing Board, remarked from the podium how he can “still picture where he went to class.” He also mentioned how exciting it was for him as a student, saying, “We feel for the colleges we attend.”

Monroe said Propositions R and V are the reasons for many new renovations and construction projects on the campuses, thanking East County taxpayers for their investment. He also stated from an economic impact study that the district has added $1.1 billion to the region’s economy annually through construction spending.

The new Building 36 will include classrooms and technologies for math and sciences, as well a new center for veteran’s resources. It is said to be done by spring of 2023. Gable called the VRC, Veteran’s Resource Center, a “one-stop shop for counseling, tutoring and comradery for our student veterans.”

Dr. Marshal Fullbright, the vice president of Academic Affairs, said he sees the investment into the campus and students as a way to retain students. “With instructional support, you are able to retain students from semester to semester and they are more likely to obtain a degree or certificate, transfer to a four-year college or university or enter the workforce to support the local economy and the community,” Fullbright said.

The pandemic plagued us all over the last year, but at Grossmont there is a light at the end of the tunnel as plans are being made to bring students back.