The Griffins look to finish what they started last year as they take their shot for the 2021 State Championship. 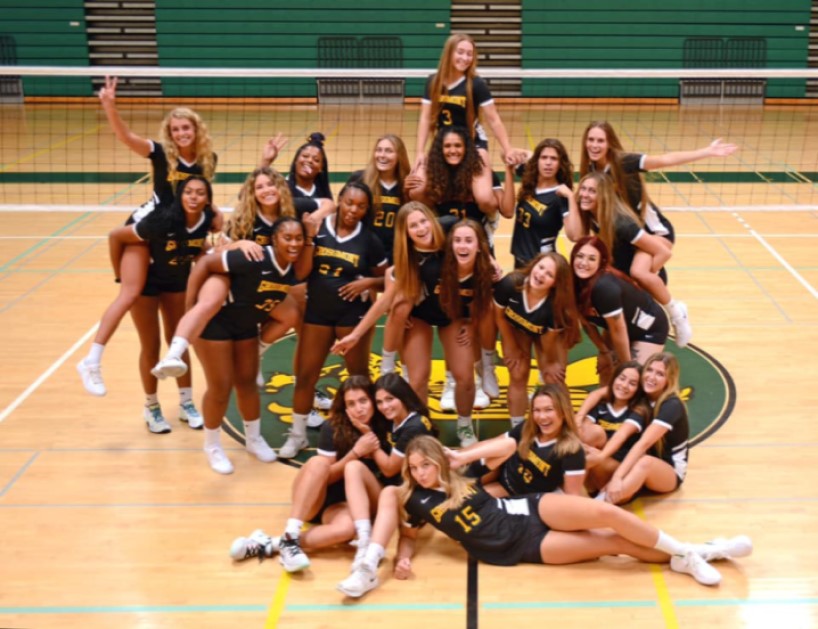 There is no holding back for the Grossmont Women’s Volleyball team behind Head Coach Jamie Ivers.

The Griffins are coming off a stellar season, making it to the semi-finals before the COVID-19 pandemic canceled the state championships. While games may have ended abruptly, the Griffins have picked up right where they left off, sitting atop the Pacific Coast Conference at 5-2.

While there are no spectators allowed to attend the games for the fall, Ivers said: “The team is still available to watch. Every game is live on their Facebook page under the name Grossmont College Women’s Volleyball.”

The team is undoubtedly feeling the love from the crowd, and how could they not with fans like Kris Turner rooting them on, shouting, “G-House! Woot, woot…Get it girls!”

Only seven games into the season, the Griffins have three women sitting in the top five in individual stats in the state, which includes Alexcis Morris in fifth with 111 total kills, as well as Kortney Hitt in fifth with 146 digs, and last but not least, Sydney Frigerio in third, averaging 9.78 assists per game. These women are setting the standard, not only on the team, but across the state. This kind of success doesn’t happen without a top-notch coaching staff, and with a coaching background like Ivers’, success is something she knows plenty about.

As head coach at Grossmont for both beach and indoor volleyball, Ivers has led the team to Pacific Coast Athletic Conference Championships each year from 2010 to 2019. Ivers has 15 “Coach of the Year” awards and three state championships under her belt. Just like Jordan needs Pippen, so does any head coach. Ivers has found her “Pippen” in Assistant Coach Brooke Callahan from Bishop, California, a Grossmont volleyball alum.

As a player, she led Grossmont’s beach volleyball team to the 2016 state championship and then returned in 2018 as an assistant coach to lead the team to a 2019 state title. She recently filled in as a first-time interim head coach of the indoor team in 2019, leading the Griffins to a state championship, where they placed third overall.

The Griffins have two important contests coming up. Both are conference matchups, the first against Palomar on Sept. 17, and MiraCosta on Sept. 22. Unfortunately, the four-game win streak the players were on was snapped Saturday after a tough matchup against Cypress, losing 3-1 in the match. The team has 14 games left and all of them are conference matchups, which means competition is heating up.

There is no room for error if the Griffins hope to climb to the top spot again in the state and obtain that 14-2 record they had last season that earned them a top-five ranking in the state. Hopefully, the Griffi