Read All About It…

Grossmont’s student newspaper has changed throughout the decades. 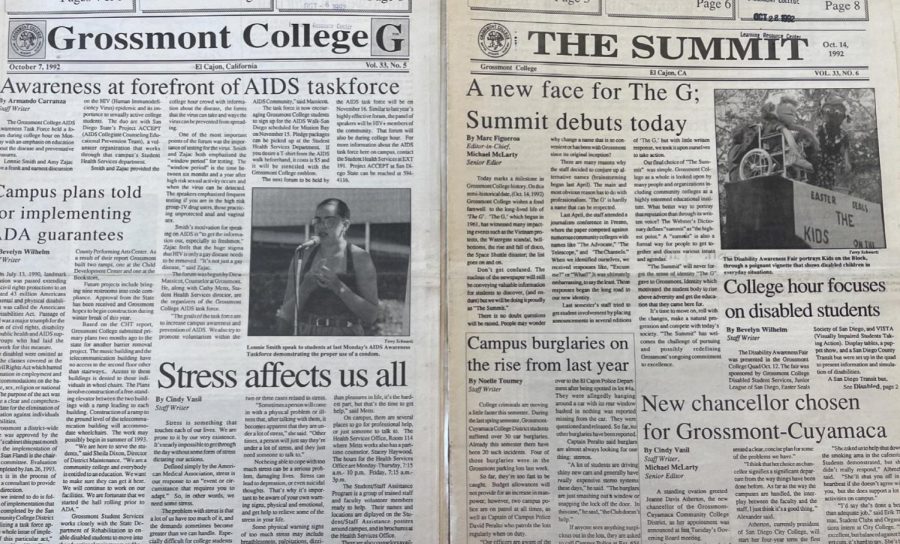 Due to the pandemic caused by COVID-19,The Summit hasn’t had a print issue since the campus was forced to shut down. As we return to our first print issue since March 2020, it’s a good time to recap the past 60 years of the school newspaper. What was the newspaper like 60 years ago, when Grossmont College was first established?

Fun fact, Grossmont’s newspaper was not always called The Summit. It was first known as The Weekly G. According to the school’s library archives, the first obtained copy of The Weekly G was published Sept. 11, 1963. Although Grossmont College was established in 1960, we were not on this specific campus until 1963. This could be the reason there are no copies of the newspaper from the first two years.

Unlike today, The Weekly G’s print issue would come out weekly, with its second published copy coming out Sept. 18, 1963. You know, because it’s called The ‘Weekly’ G. These prints came out in black and white large copies, which looks similar to any classic newspaper. The college newspaper had a “Letters to the Editor” section in each issue. These were mostly opinionated, but back in 1960 they were more passive-aggressive, unlike today’s internet comments.

“For a college, I am disappointed in Grossmont,” stated Ernie Foucault in an “Letter to the Editor” article written in 1963. “To be blunt, the bands are pretty bad.”

No matter how aggressive or rude, the Letters to the Editor did not hold back.

On Oct. 7, 1992, the last and final copy of The Weekly G would be published. Throughout the years of The Weekly G, there were many changes. Although, there were many similarities they kept from the first published copy to the last. The copies were still large and resembled a traditional newspaper, staying with it’s black and white color. The Weekly G also continued to jump articles to different pages when ran out of room.

On the contrary, somewhere between the first copy and the last, The Weekly G began to include ads into their print issues. These could include Burger King, Tom’s Subs and even attorney ads. It was also shown that there was more appreciation for pictures. In the last print issue of 1992, there was a dedicated two pages for a staff writer who took pictures of all of San Diego’s beaches. These changes proved a small evolution between the years of the Weekly G.

The Summit’s first copy arrived on Oct. 14, 1992, only a week after the last published Weekly G. So, what even was the reason for the name change? In an article titled “A New Face for The G; Summit Debuts Today,” the first page of this new print issue had the answer. Written by Editor-in-Chief Marc Firguero and Senior Editor Michael McLarty, it stated: “The main and obvious reason has to do with professionalism. ‘The G’ is hardly a name that can be respected.”

In The Summit’s first prints, the staff was listed in a small box at the bottom. Unlike today’s setup, they had editors for different subjects such as an opinion editor or news editor. There were also staff assigned to only the cartoons or the graphics. The staff writers did not edit stories, and vise-versa, the editors did not write stories.

The most recent print issue of The Summit came out March 2020, right before COVID-19 shut down our campus. At this point, there are rarely any similarities between the copies in 1963 and today, which are colorful and eye-catching.

With more appreciation shown to designs and pictures, The Summit no longer looks like a classic newspaper, but more like a magazine. With QR code technology, you could use your phone to take a picture, and it would directly take you to an online website. Unlike the first print, which only had seven broadsheet pages, the new and improved Summit had around 20 tabloid-sized pages.

Although those are all great advancements between the years, the print issue started to come out monthly instead of weekly during September 2010.

With our print issues advancing and improving over time, The Summit team is thrilled to share our first print issue since COVID-19; almost as thrilled as celebrating our school’s anniversary. Happy 60th to Grossmont College, its students and its staff!