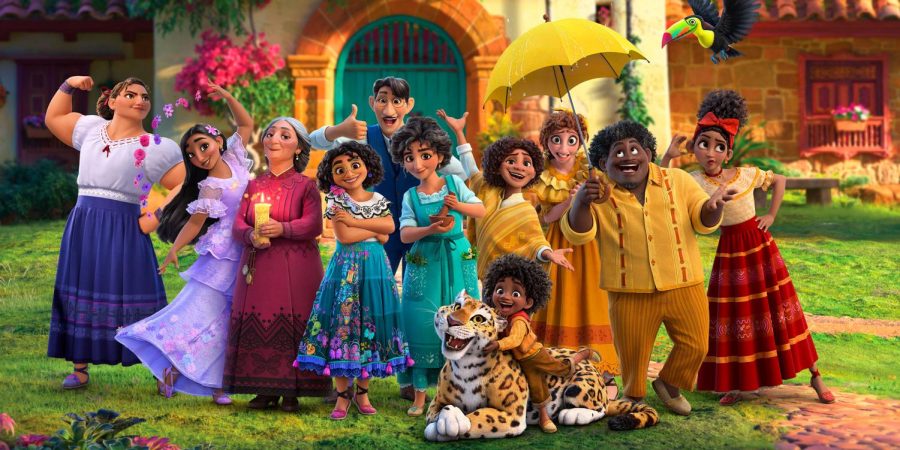 The characters from Disney’s “Encanto”

With an addictive soundtrack, colorful characters and a spellbinding story honoring family relationships, “Encanto,” directed by Byron Howard and co-directed by Charise Castro Smith, has become the most popular animated movie of the year. The story follows Mirabel and the magical Madrigal family as she embarks on a mission to save the family’s magical gifts.

Since the film’s release on Disney+, Lin-Manuel Miranda’s upbeat and emotional soundtrack has gone viral with the help of social media apps like TikTok. The song “We Don’t Talk About Bruno” was the first to draw audiences to the streaming platform and theaters after its release in November 2021. The soundtrack draws inspiration from Colombian culture and feels relatable to people from all demographics. Mirabel’s conflict with Abuela Madrigal fades away with the intimate, melancholy song “Dos Orugitas” and encapsulates the message of the film.

The film radiates magical realism by paying homage to Gabriel Garcia Marquez, Rudolfo Anaya and other Latinx writers of the era. Real issues are explored, like breaking family traditions and defying stereotypes. It holds a special place in the hearts of children coming from immigrant families who have felt the stressful responsibility of trying to honor the sacrifices their parents made to give them a better life.

“Encanto” approaches tough family topics with enough sensitivity and humor that it becomes lighthearted fun for all ages. For a movie that will excite the senses, soothe your inner child, and bring everyone closer by the end, “Encanto” is a beautiful choice.