The Duo Of The Year

The Griffins beach volleyball season may have come to an abrupt end, but the “Duo of The Year” showed utter domination in their title run. 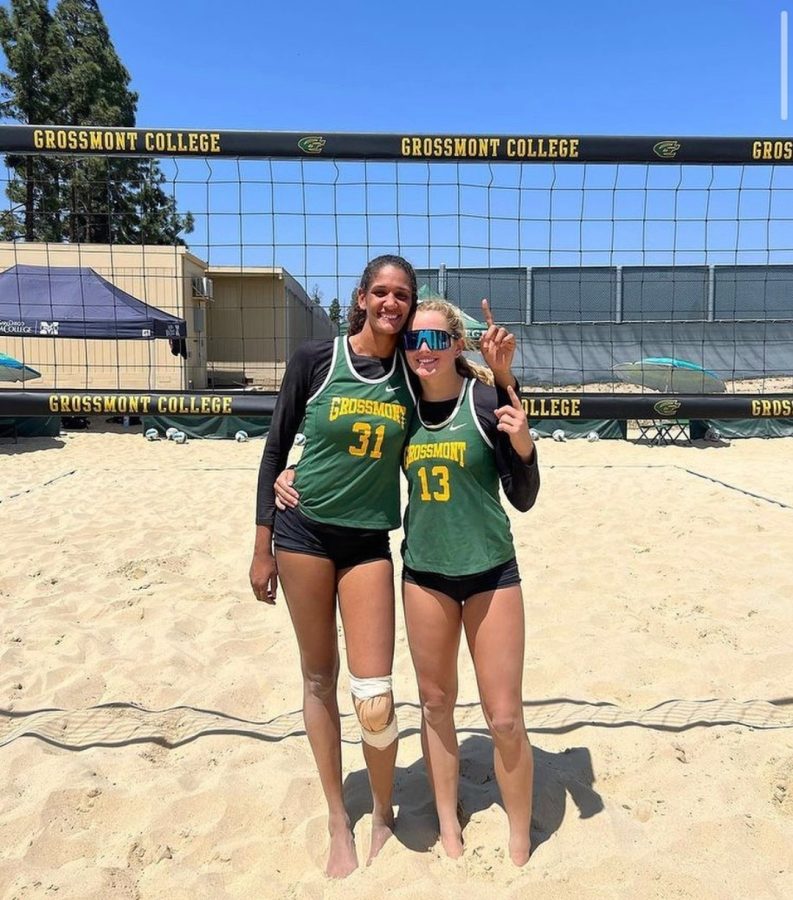 Grossmont’s run has ended after a solid season from the women’s beach volleyball team, finishing 13-8 with a conference record of 7-3. This was a challenging year for beach volleyball as the competition was fierce, and by no means was it easy for the team to make it to the SoCal Team Regional Final at Irvine Valley College.

No matter how demanding the schedule was this year, the Griffins found themselves at regionals ranked as the No. 7 seed facing off against the No. 10 seed Fullerton. Grossmont was stunned when they went down 4-1 to the Hornets, who had just come off a loss earlier that day to the No. 2 seed Irvine Valley.

While that was a tough loss, Grossmont still had one more game to make something happen when they went up against Irvine Valley, who had just beat the Hornets earlier that day. Grossmont put up a fight but evidently went down in a crushing 3-2 loss, which ended Griffin’s season and hopes for a team championship this year.

Grossmont still saw great success with its pairs team Madison Bogle and Alexcis Morris, who won the 2022 PCAC Duo Of the Year, competing in the State Championship Pairs tournament.

Morris and Bogle have been on a mission the entire year, dominating their opponents and winning all eight of their pairs’ games, outscoring their opponents 349-213. It’s no wonder why these two were awarded “Duo of The Year” and continued their regional success.

Coming in at No.1 in the tournament, Bogle and Morris started the first round facing off against No.32 Diamonique Brogan and Chloe Swanson of Irvine Valley College. Morris and Bogle finished them off quickly with scores of 21-13 and 21-17 in the match. Both women continued onto the second round, taking on No. 16 Lily Krongold and Jacelin Mckie of Santa Barbara City College. Morris and Bogle handled this with ease as they have done all season, winning the match with scores of 21-16 and 21-11.

Competition finally came knocking when Morris and Bogle met Tainea Allen and Jordan Wilson, coming in as the No. 12 seed in the quarterfinals. This match was the toughest they had played and took three sets to finish with scores of 21-16, 17-21 and 16-14. Morris and Bogle took a loss in this match but still placed into the SoCal Pairs State Championships as the No. 5 seed.

The championship took place on May 14, with the round of 16 kicking off in the morning where Morris and Bogle matched up against Cabrillo College’s Ashleigh Souza and Alanna Patyk-Randa. After three tough sets, Grossmont sent Cabrillo home and went to the quarterfinals to play Feather River Valley’s Taylor O’ Reilly and Carissa Chainey. Morris and Bogle continued their win streak, taking them down after three sets and moving them on to the semifinals.

Grossmont had to beat Santa Barbara’s Emma Crabbe and Kelissa Lemoine, only one game out from a title game. After two sets resulting in scores of 21-16 and 21-18, Morris and Bogle saw themselves struck down after an awe-inspiring run. There is some peace in knowing that Crabbe and Lemoine did go on to win the championship, and while it wasn’t our Griffins taking the title in the end, there is no doubt Grossmont remains a force to be reckoned with when it comes to volleyball.

With incredible athletes like Alexcis Morris and Madison Bogle, Grossmont has more than enough to be proud of as these two women put on one hell of a show this season, and represented what it means to be a Griffin.