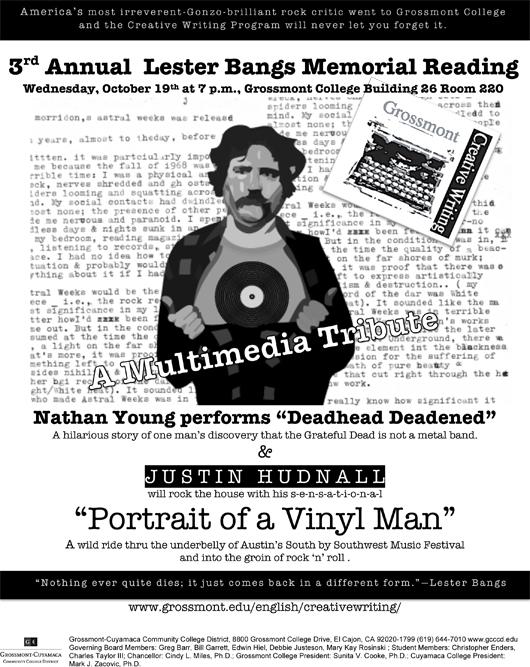 GROSSMONT COLLEGE (Press Release) — The English Department’s Creative Writing Program will pay tribute to a deceased rock `n’ roll critic and former student as part of its Fall 2011 Reading Series. The third annual Lester Bangs Memorial Reading will be held at 7 p.m. on Wednesday, Oct. 19 in Building 26, Room 220. Admission is free and the public is invited to attend.

Leslie Conway “Lester” Bangs, who attended Grossmont College from 1966 to 1968, was known as “America’s greatest rock critic.” He wrote for Rolling Stone, The Village Voice and Creem before he died from suicide in 1982. He was portrayed by actor Philip Seymour Hoffman in the 2000 movie “Almost Famous.” Considered one of the most influential voices in rock criticism, Bangs is credited for coining the term “punk,” and his subversive spirit and creativity continue to influence generations of writers.

Justin Hudnall will perform “Portrait of a Vinyl Man” at the Lester Bangs event. Hudnall is the executive director of So Say We All, a San Diego-based production company and arts advocacy organization. He also is a guest writer for the Huffington Post. “Portrait of a Vinyl Man” looks at the underbelly of the annual South by Southwest (SXSW) Music Festival, which has been held for the past 25 years at the Austin Convention Center in Austin, Tex.

Also appearing at the Bangs event at Grossmont College will be Nathan Young, who will perform “Deadhead Deadened,” a piece about how the writer learned the Grateful Dead is not a heavy metal band. For more information about the Grossmont College English Department’s Creative Writing Program, visit www.grossmont.edu/english/creativewriting, or phone (619) 644-7523.