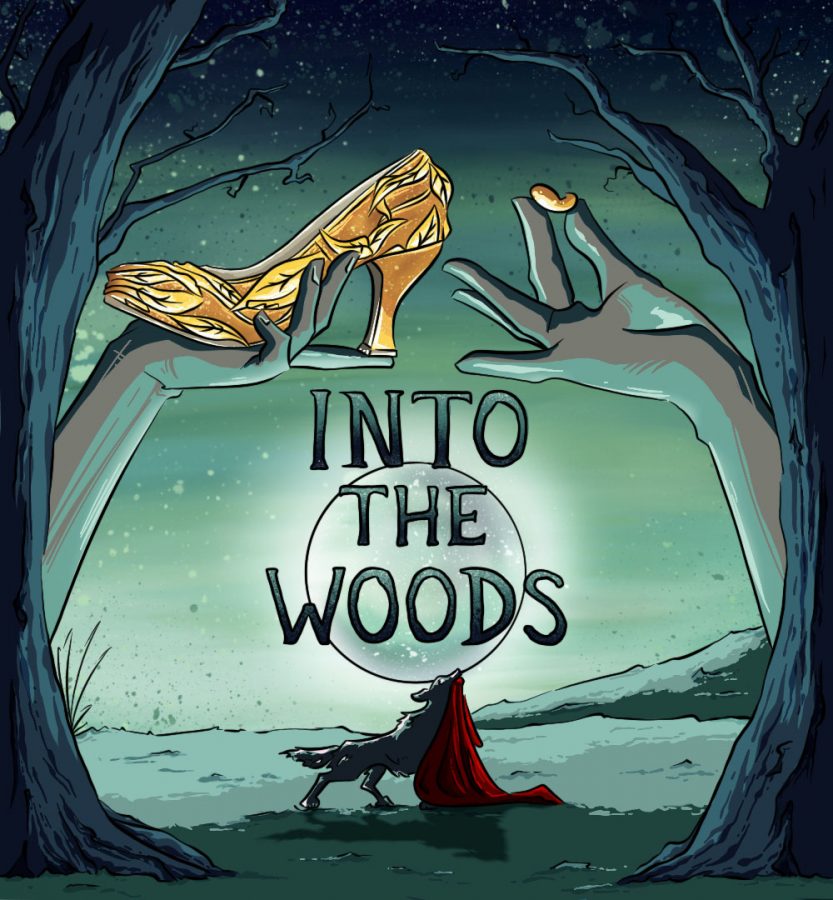 “Into the Woods” illustration by Ceinna Wolters

Bringing the Stage Back to Life

The cast of “Into the Woods” talks about being back in the theater for the first time since lockdown.

After a long hibernation, live theater seems to be returning to stages across the country.

Along with movie theaters, baseball stadiums and concert venues, live theater and its audiences will have to adapt to this new, post-pandemic world. Where do they even begin? For Grossmont College, that means a production of Stephen Sondheim’s musical “Into the Woods.”

“There’s that lingering fear of us already being so invested in it, and then worried one day I’ll wake up and see that somebody tested positive and the whole thing has to be canceled,” said Cheyenne Parker, who is portraying Little Red Riding Hood. This is a fear a lot of theater folk know well after their productions were shut down completely in March 2020.

“Into the Woods” is a very large musical with a cast of 17 actors, some of whom play multiple roles. When asked if they were worried about being part of such a big show, the actors didn’t hesitate to voice their desire for performing again. They seemed to radiate pure excitement and joy when talking about the rehearsal process.

A designer run is the first, full run-through of a show for the production team and actors. When watching the designer run for “Into the Woods,” it became clear that the actors struggled to perform the music while wearing masks. The music in Sondheim’s shows is more difficult to learn than something like “Oklahoma!” or “Bye Bye Birdie”; it’s rapid-fire and shifts quickly. If it’s difficult to learn on its own, one can only imagine how difficult it is to do with a mask on.

Singing is more than just an artform, it’s also a physical sport. The basics of breath control and enunciation haven’t changed in practice, but they have changed in intensity. The actors have to be louder and clearer with their music in order for the audience to understand what they are singing.

“Projecting is a bit difficult because it feels like we’re being muffled,” said Gwyn Torio, who plays Rapunzel and Cinderella’s Mother. “And then on top of all of that, having to run back and forth from one wing to the other…it’s like conserving all the breath you have just so you can be heard.”

After 18 months without performing, this troupe has come together to perform an incredibly difficult show under uncertain circumstances, and they are excelling at it. “We spend 15 hours a week together, every day of the week, and then we go home and practice on our own. So, I think collaboratively we all want this to be a good show,” said Aundrea Kaiser, who plays Jack’s Mother and Granny. The rest of the cast members chimed in with agreement, and spoke about how much they are enjoying working together.

According to director Bibi Mama, the production was originally planned to be a staged reading located outdoors. However, after so much time away from the theater, she felt it was important to give the actors an opportunity to perform again on the stage. Grossmont and the Theatre Department are working hand-in-hand to ensure the actors, crew and audience are all safe.

Although it’s difficult to sing Sondheim’s music in a mask, everybody involved said they understand the need to wear them. “We all mutually know to stay safe and not do something stupid because it’s no longer individually affecting …it’s affecting so many people,” Kaiser said.

Live theater is an artform requiring close human interaction and shared spaces in order to succeed. It does not just thrive from the chemistry between actors on stage, but also on the chemistry between a cast and their audience. A scene can be performed through radio or film and still be enjoyable, but seeing someone pour their soul into a soliloquy right in front of your eyes just hits a little differently. For the cast of “Into the Woods,” they’d love nothing more than to do just that.