The Woman in Charge

It’s about time students learn who is running the show on the student side of government.

The Associated Students of Grossmont College, or ASGC for short, is the student government here at Grossmont College. Members work hand-in-hand with the faculty and school governing officials to ensure student needs are met.

In a position like this, a qualified individual is a necessity because they must be able to juggle many responsibilities such as school meetings, events and even their classes. Students need to feel like they have a trustworthy source to turn to if they have issues that need to be handled appropriately. There are a lot of students who aren’t aware of the resources available to them.

The current ASGC president is Aundrea Kaiser, 18, who is in her second year at Grossmont. She is an American Sign Language major with plans to transfer to a university to work toward speech pathology and minor in theater and film.

Taking over as the new president was not an easy turnover with COVID-19 still looming over everyone. With the campus being shut down, so much was put on hold and many did not know what the future held for the campus.

Kaiser took over for an interim president when she was elected in Spring 2021, which means she wasn’t shown how the job was done. Instead, she was required to learn how to do the job as time moved forward. The current members on the board were also thrown into the fray, having to navigate the new way of operating via Zoom conferences. This hasn’t stopped Kaiser from pushing forward to make sure someone is not only doing the job, but doing it correctly.

“I watched a lot of board members in the last year resign due to lack of organization,” Kaiser said. “So now it’s my job, and really my goal, is when someone is on campus and they wonder, ‘If you need something where do you go?’ ASGC. We’re students helping students.”

Many people may be wondering what sort of obstacles they plan on tackling for the fall semester. Kaiser had different goals set for what she planned to attack first, like filling the board itself.

“The first main goal internally is to build the board, so I’m outreaching to different clubs and students on campus to let them know that there is a program if they want to get involved,” Kaiser said. “By doing that you can build, and by building the group internally, we can then really inundate the students themselves and get them involved, hear their voice, and be the student’s voice needed.”

Speaking of the board, the current one has five members, including Kaiser.

Kaiser is an optimistic person who said she took this position because she wants to see the students have a better college experience. “I’m a hopeful person,” she said. “I’m a light-at-the-end-of the tunnel mindset.”

Kaiser seems to want her fellow students to work in a safe but positive school environment that is also inclusive to all.

The ASGC is currently looking for people to join and help be a part of students helping students. Becoming a primary resource on campus for those who aren’t currently aware of the student government would be a step forward.

“We’re small but we’re looking for people, so whether you’ve done student government your whole life or just want to get involved you’re more than welcome to come to us in Building 60,” Kaiser said. “You can be one of the change-makers as well. I’m excited, and the four other board members are excited to recruit and build our board and help Grossmont move in a positive direction.” 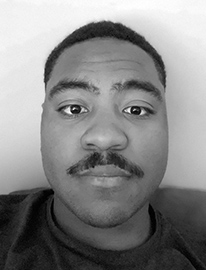 A 27-year-old MCOM and journalism major. Loves listening to podcasts like “the Joe Budden Podcast” and “Dungeons and Daddies.” Father of four trying...